My take on a dungeon crawler using twine:

This game represents 10s of hours of research and tweaking, and is my second major game using twine (and much better I feel).

The core of the game is complete and things are feeling more polished.

Let me know if you find any bugs or improvements you'd like to see.

*Not recommended for mobile*

New enemy and area to explore for continued game play

Ability to save and load your game

Interactive maps to move around in (i.e caves)

Added health on kill and life steal in shop

Created feature to improve visibility in mines (available in shop)

Better formatting and balancing have also had hours dedicated to

Supply crates in caves have been implemented

Strengthened plot (i.e much, much better)

The river and its secrets

Fixed bug where autoheal would consume too many heals

Added  the baths and bath tickets 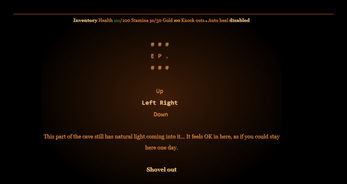 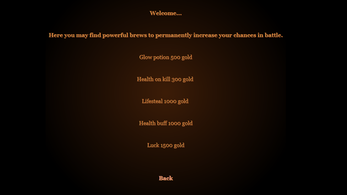